Take a look at the infographic below to see the trends that shaped the bridging finance market in 2019.

Average LTV levels fell to an average of 53% 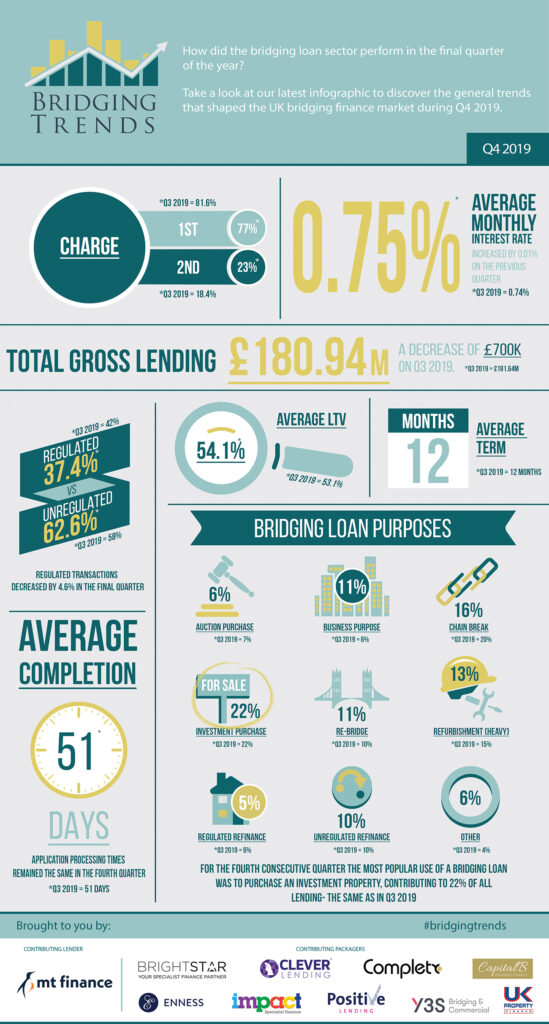 “Despite a disruptive year for the property market owing to the political uncertainty, the figures provided for 2019 were encouraging. Property professionals have continued to utilise bridging finance as a tool to support their investment. We have also seen heavy refurbishment continue to grow as investors and developers look to maximise their capital returns.

“It will be interesting to see how next quarter’s figures will be affected as visibility on Brexit continues to improve.”

“I am not surprised that lending for 2019 was down on the previous year and that Q4 completions were also down Vs the rest of the year. It was a difficult year in general with the general election and Brexit, but with a more stable government and Brexit done, I expect to see things moving again in 2020 for a better year.

“The level of new enquiries is high, and we have been extremely busy from early in the New Year. I expect those pipeline cases that were stuck in Q4 to complete now and things should start moving again now. Bridging demand remains high and with plenty of competition out there amongst lenders all flush with liquidity, there is pressure on rates to remain low – all good news for borrowers. I think we will see growth again in 2020.”

“I think these figures show how robust the short-term finance market now is.

“I am not surprised to see second charge loans increasing. My view is that the cost of funds has fallen in the sector to a level where a flexible second charge facility has become a very cost-effective finance solution compared to some more traditional options.

“Whilst the quantum of money fell it was less than 5% which in such a turbulent year, with Brexit and election uncertainties, I think we should be satisfied. My view is that the fall in loan quantum has a strong correlation to difficulties in getting properties valued at the right level, with valuers worried about where the economy was heading and having to use distressed sales as comparables with trading volumes lower. Therefore, many loans didn’t happen or did so at a lower level.

“I believe we have already seen a shift in valuer sentiment post-election, and I think 2020 will be a big year for this industry.”